Mention the names Elsa and Anna and many young children will smile and remember the words to the hit Disney song ‘Let it Go’.

But reel off Rapunzel, Hansel & Gretel or ask a young child if they understand the moral message behind The Three Little Pigs and chances are you’ll be met with a blank expression.

It’s a sight that was once familiar at Atlantic Academy Primary on Portland but not anymore as fairy tales are an integral part of the curriculum at the school.

Twisted Fairy Tales was also the theme for this year’s range of World Book Day activities at Atlantic Academy Primary.

Children dressed up as a variety of their favourite characters from books, fairy tales or otherwise, ranging from Oliver Twist to Goldilocks and Alice in Wonderland. Taylor Kitton (Year 2) dressed as Alice in Wonderland and pictured looking terrified of the Queen of Hearts!

Students then spent the day taking part in activities centred around fairy tales from producing videos where they explain why they love a particular fairy tale to reading sessions and interactive activities and the day finished with an all-school fairy tale themed bingo session.  A fairy tale stone hunt took place on the beach nearby and was organised for the key worker and vulnerable children attending school. 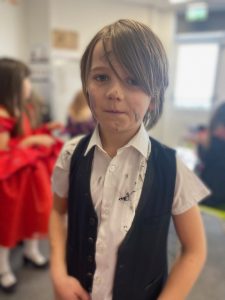 Melissa Heppell, Principal of Atlantic Primary, has also ensured fairy tales are sewn into the curriculum throughout the academic year in PHSE lessons or reading sessions at the all-through school for children aged four to 16. 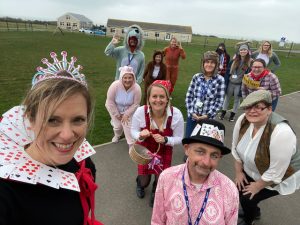 ‘’The life lessons and morals that children are taught through traditional fairy tales simply don’t exist in modern children’s books. I also believe the traditional fairy tales provide a useful insight into style of English language that is not replicated in modern books and it’s important for children to be exposed to those old-fashioned turns of phrase and words. It gives them a useful insight into how the English language has evolved.” 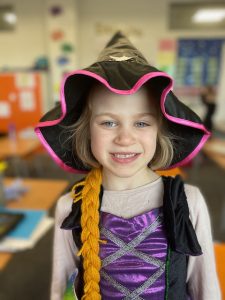 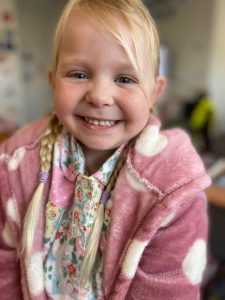 Pippa Murray (Y1) dressed as a character from The Midnight Gang