Youngsters at Bovington Academy said ‘tanks for the presents’ when Santa dropped by on a Warrior Infantry Fighting Vehicle!

Youngsters said ‘tanks for the presents’ when Santa dropped by on an unusual mode of transport.

He brightened up a grey winter morning at Bovington Academy arriving by tank.

The annual tradition of ditching a reindeer-pulled sleigh for an Army vehicle to bring presents to the primary students at Bovington Academy continued this year to ensure gifts for all.

Scores of excited children lined up in their bubbles to stand in the car park to watch as a Warrior Infantry Fighting Vehicle made its way through the school gates. 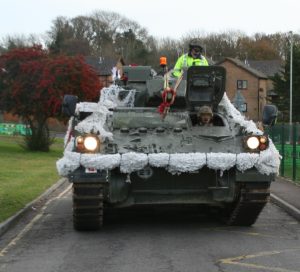 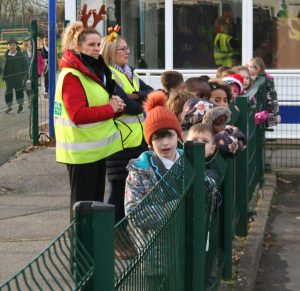 The mighty tank was covered in snow and reindeers and was occupied by Santa and two elves – one serving as a driver and the other a vehicle commander.

Santa duly leapt out of the tank to deliver a sackful of presents and wave to the children before departing. 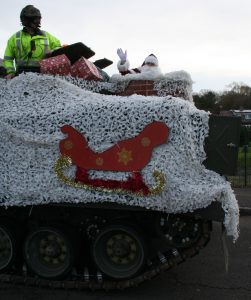 Principal Sara White told the Dorset Echo: “The arrival of Santa on a tank is a tradition that started some 20 years ago and also signals the start of our Christmas Day at the school. It’s a day filled with Christmas activities.

“The presents bought were funded by the Parent Teacher Friends Association (PTFA) and the tank was decorated by the Army.

“It’s fantastic that the tradition could continue this year despite the Covid-19 restrictions in place.’’ 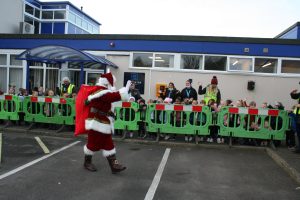 The tradition to allow Santa to use a tank instead of a sleigh stretches back over 20 years and is a nod to the primary school’s links to Bovington Camp which is close by.

This year Santa’s role was taken by Cpl Hanna, the vehicle commander was Sgt Burton and the driver was Sgt Hird.

Although not an Army school, it is estimated that around 65 per cent of the children who attend Bovington Academy, (which is part of the Aspirations Academies Trust), are from military families. 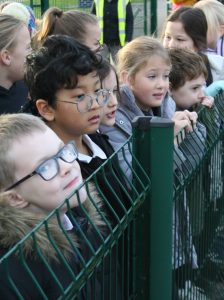 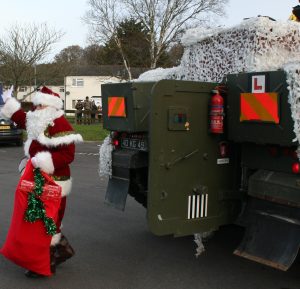 Real-world projects mean SSWL students are not just exam-ready but workplace-ready thanks to Aspirations Employability Diploma!

From an eco restaurant to a go-karting track or animal sanctuary, students at Space Studio West London...

To mark the special occasion, a reunion party for past and present pupils, teachers and principals has...