A 12-year-old Weymouth student has taken part in a roundtable discussion with Government officials to help end discrimination around afro-textured hair in schools.

The event – designed to highlight Black History Month – saw Budmouth Academy’s Marli McNab participate in a Zoom discussion with representatives from the Department for Education, Ofsted, Foreign & Commonwealth Office, HMRC and the Ministry of Justice.

Around 60 adults took part in the video call. They listened intently as Marli, along with three other students from around the country, explained the importance of greater understanding around black hair.

The Year 8 student, who is mixed-race and proud of her shoulder length hair, said she has always received excellent support from staff at Budmouth Academy and has never been made to feel that her curly mane is an issue.

However, this was not always the case. When Marli attended her primary school she found herself made to feel unwelcome in the classroom because of her hair and on more than one occasion was either moved to the back of the room or made to tie it up. Marli told the Dorset Echo: “When I attended primary school, I came in one day with my hair down and the students sitting behind me complained that they couldn’t see. I was moved to the back of the classroom and it made me feel really insecure and it made me feel that I was not welcome at that school. Taking part in the Zoom call made me feel really proud of myself and that my voice meant something.’’ 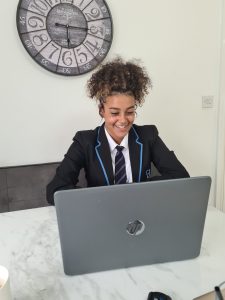 Budmouth Academy’s Principal, Mike Hoffman, added: “Everyone at the school is so proud of Marli because she stands up for what she believes in. Young people are often ignored or not taken seriously. Students like Marli and others like her, demonstrate that they have important things to say, and they deserve to be listened to.’’

Marli was invited to participate in the high-profile discussion after submitting a video to mark World Afro Day in September and winning the category for her age group. Her words impressed Michelle De Leon, the founder and CEO of World Afro Day who put her forward for the Zoom discussion.

Revealing what her hair means to her, Marli states in the video: “Afro hair shows my culture, it shows me who I am and what I am made of. It proves to other people that I am strong and I am beautiful.

”My hair is my unique superpower. In the UK, black and mixed race school children are often discriminated against. Complaints are often made that their hair is too short or they are asked to tie their hair up because it is too big or they are sent home for having braids that are deemed unsuitable.

”Where I live [in Weymouth] it is even hard to find a shop with appropriate products for my hair. And finding a hairdresser who specialises in cutting afro hair is impossible. People should not be made to feel insecure about their hair. My hair is not public property. Strangers seem to think it’s ok to touch my hair whenever they choose. They think I’m ok with it but it makes me feel really uncomfortable and I feel like it’s an invasion of my personal space.’’ 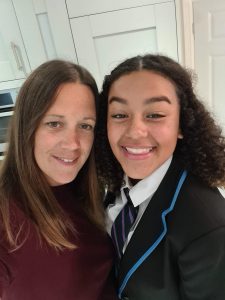 Marli pictured with her mother Vicky

Marli’s mother, Victoria McNab, said she was proud of her daughter’s confident voice: “I think she’s great to speak up about what she believes in and I think it’s important that if you feel strongly about something that you should try and help make a change. No matter how small your action, it will still help to bring change and I’m proud of Marli for having the courage to act on her beliefs.’’

Budmouth Academy’s English curriculum now includes a range of books by Black authors and in recent weeks there have been whole school assemblies that have focused on the subjects of racism and discrimination.

Marli’s Form Tutor, Samantha Wiles, said: “Marli is an outstanding young woman, she’s only 12 but she has such a mature attitude towards the subject of racism and is a role model for other students who are experiencing something similar. I couldn’t be more proud of her and she’s very modest about it.’’ 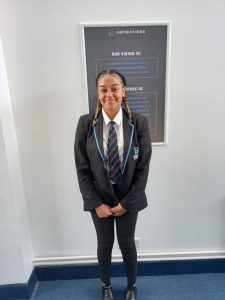