The love for science is shared by the whole school, and with remote learning meaning that students were unable to celebrate British Science week this year as they usually would, Oak Hill decided to host their own science week instead!

The workshops, hosted by Fizz Pop Science, gave each year group a chance to explore a topic they had been learning about through a variety of fun in-class experiments.

Fizz Pop are a patron of science at Oak Hill and the workshops offered to students have been enjoyed by Oak Hill for many years.

In Year 3, students were introduced to Toxic Tim and Dangerous Dan from Fizz Pop who hosted a ‘Plant Power’ workshop.

The hour-long session for each class consisted of four different experiments for students to get involved with.

Students investigated how oxygen forms by using a light to emulate the sun, and then used plasticine to model different parts of a plant cell.  Capillary action was also explored to discover how plants get their water.

The final experiment, and by far the most popular with the students, involved replicating the mucus within a plant cell…by making slime! 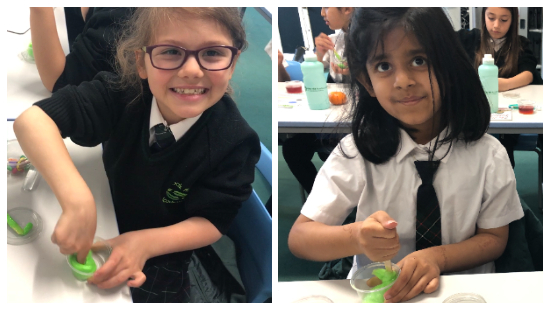 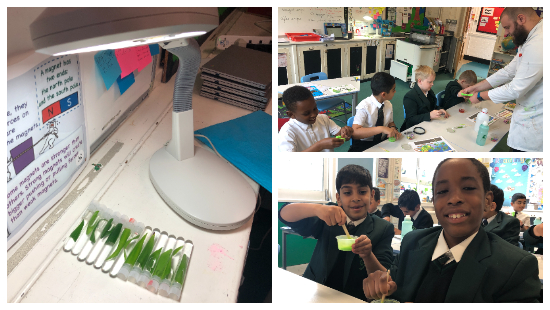 Varun, Year 3 student, said: “My favourite part of the workshop was making the slime because I’ve never had slime at home before but I’ve always wanted it!”

Megan Cronin, Science Coordinator at Oak Hill, said: “Science has always had a big presence at Oak Hill and we’re really passionate about it.

“We usually celebrate British Science Week every year and the children love it and have so much fun.

“With British Science Week falling during remote learning this year, we didn’t want our students to miss out on the opportunity to celebrate science.

“We did do some activities for British Science Week during remote learning but we were unable to have that hands-on practicality element, so hosting our own science week later on in the year was a great alternative.”

Students were fully engaged during the workshops and even more excited when they were able to take some of their work home. Eddie, Year 3 student, said: “The workshop was a lot of fun because I got to play with different materials and feel different textures with the plasticine.

“I enjoyed making different shapes to model a plant cell and I got to take it home too which is really cool.”

The Fizz Pop workshops were not the end of science week, though – Year 3 also hosted a Science Fair.

In the weeks leading up to the science week, Year 3 students had been preparing presentations boards to showcase their work on plants. Groups in each class took turns to review each other’s presentation boards, and the best group from each class was awarded a certificate.

The science fair was an opportunity for Year 3 to showcase all of their science investigations from the half-term. 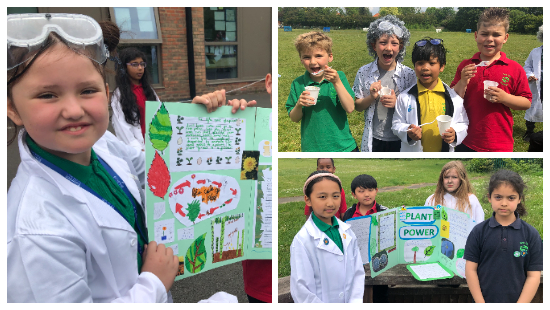 To finish the week-long science celebrations, staff and students dressed up as mad scientists for the day!

Megan Cronin, Science Coordinator, said: “Oak Hill’s Science Week was a lot of fun and the children loved it!

“I really believe that giving the children this opportunity has been a vital experience for their education.

“We hope to turn the Science Fair into an annual tradition across all year groups going forward.”