Lest we forget: Hundreds – including pupils at Harriers & Dashwood – turn out for Remembrance Sunday services across Banbury area

Hundreds of people lined the streets of Banbury and its surrounding villages to honour members of the armed forces who served in past and present wars and conflicts.

Crowds gathered in village centres and the town centre of Banbury on Remembrance Sunday November 14 to pay their respects to the fallen – the men and women who lost their lives in two world wars and later conflicts.

Last year, Covid restrictions forced the cancellation of the street parade and reduced the wreath-laying to just seven tributes in Banbury.

This year, Remembrance Day in Banbury began with a 300-strong military and civic procession that made its way from Broad Street, up High Street and along Horsefair to St Mary’s Church for a memorial service.

The service was broadcast on speakers outside the church for those who couldn’t be inside.

After the service, a wreath-laying ceremony at the war memorial in People’s Park saw 50 wreaths placed on the cenotaph as standard-bearers, cadets, veterans, armed forces personnel, representatives of local schools and organisations and members of the public looked on.

Buglers played the Last Post before a one-minute silence and the Reveille to end the silence.

Leader of the council and president of the Royal British Legion’s Banbury branch Kieron Mallon said: “Many people in Banbury come together on Remembrance Day to pay tribute to family members who went to war but did not come home.

“Remembrance Sundays are tributes to the fallen. They ensure that the sacrifices of those who paid the ultimate price are never forgotten.”

Pupils from Harriers Academy and Dashwood Academy both took part in the Remembrance service in Banbury on Sunday.

Alex Pearson, executive principal of Harriers Banbury Academy & Dashwood Banbury Academy, told the Banbury Guardian: ”It was lovely for Harriers to once again be part of Banbury’s Remembrance Sunday Parade.

“Each year we are asked, along with Dashwood, to represent the town’s schools on the parade and to lay a wreath at the cenotaph in People’s Park. It was fantastic to see so many Harriers pupils along the route of the parade. It is always a poignant day and one we are very proud to be part of.” 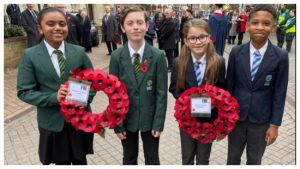 Villagers from all across Banburyshire from Bloxham to Deddington, to Middleton Cheney to Woodford Halse to Kineton among others gathered to reflect and remember those who served their country.