He gave the nation hope, touched the hearts of millions and has inspired one five-year-old girl to follow in his footsteps…

Young Gia Dhiman has completed 100 laps of her garden on her bike and raised more than £1,000 for Great Ormond Street Hospital – all in memory of Captain Sir Tom Moore.

Moved by the sad news of his passing, Gia was determined to honour his heroic example: that you are never too old or young to make a positive difference in whatever way you can.

Sir Tom, a former businessman and WW2 veteran, raised a phenomenal £32.7 million for the NHS after deciding to walk 100 laps of his back garden before his 100th birthday during the country’s first lockdown. His resolve and dedication combined with his humour and wisdom touched the world and turned him into an overnight celebrity.

Just hours after Sir Tom’s death last week, Gia, who lives in Hanworth, Feltham and is a pupil at her local Oriel Academy, sat down with her mum Kavita Dhiman, 33, who asked her: ‘’Have a think about what you can do 100 times in memory of Captain Sir Tom.’’

Mrs Dhiman added: ‘’I recorded a video of me asking her the question. She decided that she could ride her bike 100 times around the garden. I told her that it was a great idea and that she could actually do it if she wanted to. She was so excited!’’

Gia has proved herself to be just as resilient as Sir Tom and despite the cold temperatures in recent days completed 10 laps a day – sometimes with her French bulldog puppy Bruno joining her for encouragement.

Revealing why Sir Tom was special to her, Gia said: ‘’Even though he was 100 years old he still did his walk to raise money for the doctors and nurses. It made me very happy to see the videos of him doing his walk.

“My mummy told me that Captain Sir Tom was 100 years old. I feel sad that he’s gone but I know that the fairies are going to look after him.’’ 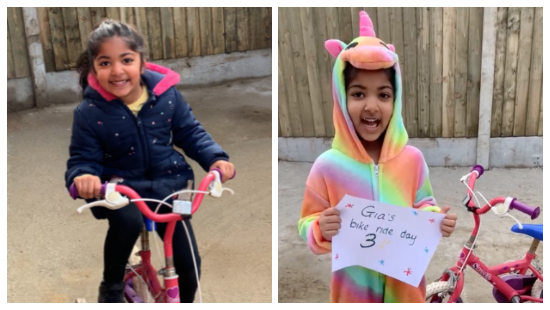 The decision to turn Gia’s 100 laps into a charitable initiative came shortly after speaking to other family members. Mrs Dhiman said: “I sent the original video of Gia talking about doing it to my brother.

“He said if she does it, he’ll give her a pound for every round she does. I quickly reminded him that she has to do 100 rounds so that’ll be £100 and he was still keen to donate!

“My mum then found out and said she’d like to donate too. Before we knew it, Gia had already started raising money before even beginning the laps.

“We realised then that this was something special and if we told enough people about it, we could raise money for NHS charities like Captain Sir Tom did.”

A Go Fund Me page was set up and Gia quickly exceeded her initial £300 target.

Gia chose to raise money for Great Ormond Street Hospital (GOSH) to help children of a similar age to her. 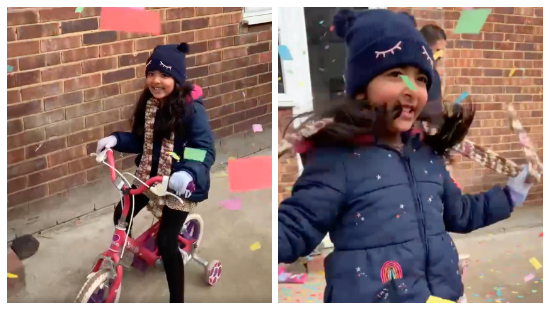 Gia celebrates as she completes her 100th lap.

All of Gia’s family are incredibly proud of her commitment to fundraising at such a young age. Mrs Dhiman explained: “We’re all so proud of Gia. We’re always proud of her anyway, but even more so now that she’s found something she’s passionate about and having fun with.

“Supporting the NHS doctors and nurses is the biggest thing anyone can do at the moment – they are the backbone of what is happening {with Coronavirus]. They need our support. That’s why I’m so glad Gia wanted to do this and raise money.”

Life lessons with Daps: Music star returns to school to reveals his top tips on how to succeed and thrive to our West London students

He has won numerous accolades for his work as a music video producer and normally fills his...

Read more Life lessons with Daps: Music star returns to school to reveals his top tips on how to succeed and thrive to our West London students
20/09/2021

The best way to tackle challenging conversations: Why kindness rather than fear results in growth & learning

What is the purpose of a challenging conversation? In highlighting that ‘'the culture of any organisation is...

Read more The best way to tackle challenging conversations: Why kindness rather than fear results in growth & learning
09/09/2021

We talk about the principles underpinning the work of the Aspirations Academy Trust and hear about how...