Is living on Mars the answer to climate change? Is it even possible to live on Mars?

These are questions that were put to 12-year-olds at Wykham Park Academy in Banbury as part of a space challenge project. And their solutions left scientist Dr Heidi Thiemann impressed.

All year 8 students were split into groups and tasked with looking at the subject of space colonisation with the aim of combining knowledge from the subjects of maths and science with teamwork.

All groups then put together presentations which were judged by Dr Thiemann, who is Space Technology Training Project Manager at Truro & Penwith College and director of the Space Skills Alliance.

Students Sophia-Mai Whiteside and Daanya McCarroll were declared overall winners for their project, which was inspired by the Eden Project in Cornwall and saw them suggest placing a dome over Mars to allow humans to live on the red planet. 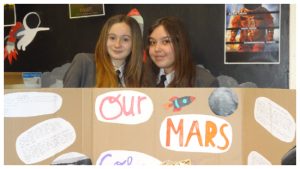 This involves combining different curriculum subjects to help put learning into context. All ATL assignments include group work designed to encourage teamwork and collaboration, skills which are prized in today’s workplace.

Mr Sterland told the Banbury Guardian: “We decided to opt for a space project because of all the media interest in recent months around space travel and the work being carried out by high profile figures, including billionaire entrepreneur Elon Musk and Amazon’s Jeff Bezos, around travel to Mars. It led us to think, ‘is it possible to colonise Mars?’
‘‘This is a real world question that we knew would interest our students and allow us to incorporate different subjects including maths and science. It was great to see how enthusiastic all the Year 8 students were about the ATL project. The project came together so well.’’
Mr Sterland added Dr Thiemann’s involvement also saw her inspire the female students taking part. He said: “Dr Thiemann is heavily involved with the British aerospace industry and her involvement definitely inspired our female students which was great to see.’’ 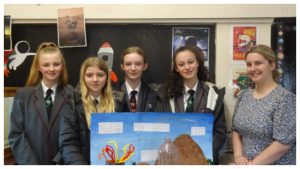 Sophia and Daanya said they were thrilled Dr Thiemann judged their project to be the best.
Sophia said: ‘’It was a really tight competition and all the projects in the top three were really good.
‘’Our project was inspired by the Eden project we were excited to make something that could work for the future.’’

Daanya said: ‘’Sophia and I are both creative people but we love tech and engineering.
‘’We are very proud of what we have achieved and the ATL project benefited our learning as Mars is something that will happen in the future and it was fun to learn about it and gain an insight into the future.’’