He is regarded as a pioneer of IVF and a familiar face on the small screen through
his popular children’s tv shows.
But it was the power of failure, rather than science, that Professor Lord Robert
Winston focused on during a recent virtual talk with Sixth Form students at Park
Academy.
Pupils at the Park View Road school in Uxbridge, spent almost an hour listening to
Lord Winston provide his advice on how to succeed in the workplace and in life. 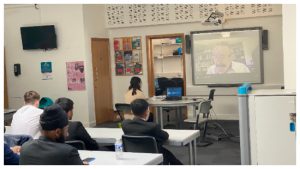 Lord Winston is Professor of Science and Society and Emeritus Professor of Fertility Studies at Imperial College London.
In the 1970s he developed gynaecological surgical techniques that improved fertility treatments.
He later pioneered new treatments to improve IVF and developed pre-implantation
diagnosis. This allowed embryos to be screened for genetic diseases and has allowed parents carrying faulty genes to have children free of illnesses such as cystic fibrosis.
Lord Winston explained it was a string of failures – and teamwork – that eventually led to the breakthroughs. He said: ‘’I don’t think you can succeed without failing.
He told the Hillingdon Times: ‘’My working life has been about failure, we carried out numerous experiments that failed before we succeeded with our work in fertility.
‘’It’s also important to highlight the need to collaborate and be able to work in a team in order to succeed – most people don’t succeed on their own.’’ 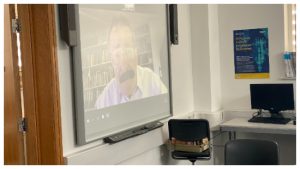 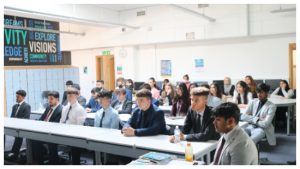 Lord Winston revealed he was impressed by the questions the Park Academy
students asked as he could see ‘’they were engaged and they were also polite. It’s
clearly a good school which is doing a good job. I look forward to returning in
person.’’

Umer Mohammad, Head of Sixth Form at Park Academy, helped to organise the talk which was aimed at inspiring the students as they consider their next steps.
He said: ‘’Hearing Lord Winston discuss how important failure is in order to progress was a really important life lesson for the students.
‘’It was important for the students to hear that they can fail and that it’s an important part of learning.
‘’Lord Winston has been recognised for his achievements but it’s because of the
failures he encountered on the way.
‘’It’s important for the younger generation to see the importance of failing. A lot of the time when they fail, they give up but if they persevere they would succeed.’’

Lord Winston has become a leading voice for science through presenting TV shows, including The Human Body, Child of Our Time and Walking with Cavemen.