“Every decision you make has consequences. Who are you associating with and is it putting you at risk?”

These questions were posed to students at Park Academy in Hillingdon during a talk from knife crime campaigner Yvonne Lawson.

Her teenage son Godwin was stabbed to death in the street in Stamford Hill, London, as he tried to stop two of his old school friends from being attacked by four young men.

Godwin, who was attending Oxford United Football Academy on a scholarship, was
just 17.

Mrs Lawson, who set up the Godwin Lawson Foundation (GLF) in memory of her
son, shared his story with Park Academy students in the hope that it will make them think twice about knife crime or associating with peers who carry a knife.

Mrs Lawson acknowledged knife crime has become accepted by teenagers today as part-and-parcel of growing up but urged them to think about the devastating impact it has on families.

Recalling the moment she was told about Godwin’s death, she told the Hillingdon Times: “I remember I was at home and there was a knock on the door and it was two police officers. I couldn’t believe it when they told me what had happened. I called Godwin’s mobile and kept calling his number and each time it went to voicemail and I must have left 50 messages desperately hoping and praying that Godwin would pick up the phone and tell me he was fine and on his way home. I kept asking the police officers ‘who did this to my boy?’ 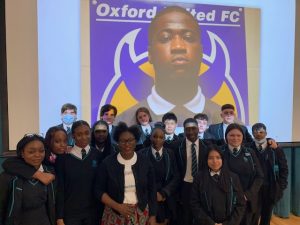 In the decade that has passed since Godwin’s death, Mrs Lawson has worked
tirelessly to raise awareness about knife crime and gangs and also successfully
campaigned to bring a change in legislation.

Mrs Lawson has worked with former Prime Ministers David Cameron and Theresa
May and also the current Mayor of London Sadiq Khan. She was honoured with an
MBE last year.

As a result of Mrs Lawson’s work, together with support from the then Enfield MP,
Nick De Bois, new legislation came into force on 17 July 2015 requiring a mandatory sentence of at least six months for anyone caught carrying a knife for the second time. 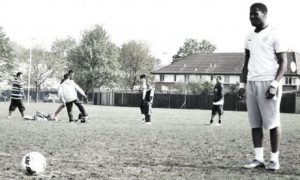 In addition to the workshops and presentations Mrs Lawson holds, she has also
gained the support of the Tottenham Hotspur Foundation which hosts the annual
Godwin Lawson Foundation Memorial Football Tournament.

According to the latest statistics, 2021 was the worst year ever in London for
teenage homicides with a total of 30 recorded.
However, according to the Met in the calendar year to November 2021, compared to the same period before the pandemic in 2019, knife crime fell by 32% or 4,613 fewer offences.

Park Academy Year 11 student Millie McKenzie,16, said: “Mrs Lawson was very
strong and her words were moving. She is right, it is all about the decisions that you make and hopefully her words will make us think twice.”

Park Academy’s Principal Suvi Mohey added: “We are really grateful to Yvonne for
coming to speak to our students. The talk was incredibly moving and it was inspiring to hear Yvonne tell us her story. As a school we feel that it is vital for us to educate the students on the dangers that they may face and on how they can make responsible choices.”