Children at a Wareham primary enjoyed their first ever virtual author visit and learnt about the power of hope and the power of one person to help change the world to make it a better place.

The message was central to a literary talk involving renowned children’s author Josh Lacey and pupils at Bovington Academy.

Due to Covid-19 restrictions, Mr Lacey could not attend in person but made sure he was able to make a virtual visit via a video call.

Mr Lacey, who lives in London, also delighted students by revealing Purbeck in Dorset is one of his ‘’favourite parts of the world’’ and whenever he visits he enjoys stopping off for fish and chips in Swanage!

Year 4 youngsters at the Wareham, Dorset, primary school have been reading Mr Lacey’s book, Hope Jones Saves The World. They enjoyed being able to discuss its main themes, climate change and pollution, with him during the recent Zoom session.

The book’s protagonist is Hope Jones who is worried about climate change. She makes a New Year’s resolution to give up plastic and wants to inspire others to do the same with her website hopejonessavestheworld.com. When she realises her local supermarket seems to stock more unnecessary plastic than food, she makes it her mission to do something about it. 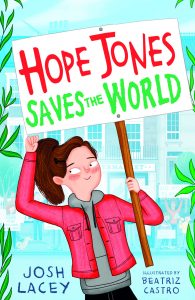 Mr Lacey has two young daughters and said their futures are the driving force behind his focus on the damage that is being caused to the environment.

He said: ‘’At the moment people aren’t so worried [about climate change] because we are dealing with Covid but it is there in the background. Climate change is something I think about and worry about and it’s connected to having two daughters and I worry about what is going to happen to them and the environment in the future.’’

Hope Jones Saves The World is one of three in the series, the others are Hope Jones Will Not Eat Meat and Hope Jones Clears The Air.

Asked where the inspiration for Hope’s surname came from, Mr Lacey confessed a swashbuckling film hero may have influenced his choice: ‘’Maybe I borrowed that from Indiana Jones – but I’m not really sure.’’

Bovington Academy is part of the Aspirations Academies Trust and the virtual author talk is one of many taking place in schools across the Trust this year in partnership with Penguin Random House. 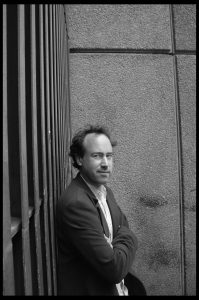 Bovington Academy’s principal, Sara White, told the Dorset Echo: ‘’The virtual author visit was a first for the children of Bovington, but they embraced the new way of doing things and really enjoyed listening to the inspiration and motivation behind Hope Jones.

‘’All of the children prepared questions and were captivated by Josh’s responses and encouragement. I am sure we will have many more budding authors following such an engaging session; the children were still talking about the event enthusiastically days later.’’

Mr Lacey was also kind enough to pass on his top tips for writing success to the students. A good starting point he said is to write down ideas and thoughts for stories in a notebook and then work on crafting them. And his top tip? ‘’Feed your imagination through the people that you talk to and interact with and the books that you read.’’