The World, Euro & Commonwealth medalist provided useful insight into the grit and determination needed to succeed and rise to the top in her field.

In addition to answering their questions, she wowed them with her walking handstands and passed her medals and sparkly Team GB leotard around for them to hold.

Commenting on the importance of visiting schools like Oak Hill and engaging with young children, Claudia told the Hounslow Herald: “Hopefully they feel inspired to take up gymnastics and develop a passion for it. I remember speaking to one child at another school who told me they were bullied for liking gymnastics and I was able to tell them not to listen to people like that and to focus on doing what they enjoy [gymnastics].

“I can remember being told I would never make it, but I didn’t listen and it inspired me to do better.’’ 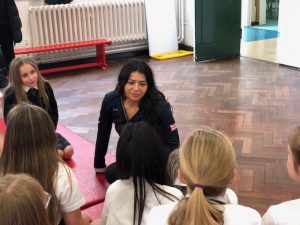 Claudia has taken part in over 200 competitions and has over 500 medals. She came to prominence at the 2014 Commonwealth Games where she was the first English woman to win four gold medals since 1930.

In 2015, Claudia was part of the women’s gymnastics team that won Great Britain’s first-ever team medal, a bronze, at the World Artistic Gymnastics Championships. She competed at the 2016 Summer Olympics in Rio de Janeiro. 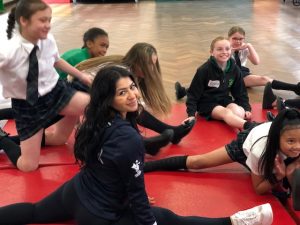 Claudia, who is also a former Strictly Come Dancing semi-finalist, told the students it was her boundless energy that prompted her parents to send her to a gymnastics club.

She revealed: “I was always swinging on the doors and chucking my sister around and my parents were being driven crazy by me so they sent me to a [gymnastics] club.’’

Claudia’s visit was organised by Premier Education Group which works with Oak Hill Academy and oversees the Rise Gymnastics programme developed by British Gymnastics to engage and inspire children into the sport.

Laura Taylor, Associate Principal at Oak Hill which is based in Ashford Road, Feltham, said: ‘‘Thank you to Claudia and Premier for making this visit happen. The students had a wonderful afternoon spending time listening to Claudia and asking her questions.’’ 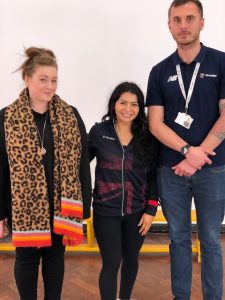